I started the day off with a whopping 16-minute work out at the neighborhood gym, followed by a chai at a local coffee shop/bakery where I tried ordering all by myself.  My chai was SO hot, I proudly tried out my limited Spanish, by saying, “Muy caliente.  Una mas cuppa por favor?”  So the barista quickly set about making me another chai!  I pointed to my cup and said, “una cuppa por favor” and he gave me a sleeve.  Ah – relief AND 2 cups of chai.

… 12 hours later, all I can say is WOW.  The drive was amazing – reminiscent of the highlands of the Philippines and the jungle of Mexico.  The road was muddy and riddled with potholes and ruts, and at one point, we discovered the road ahead had washed out completely, so took a different route. It was an adventure and I was totally in my element.

When we rounded the last curve into the region of Seaquiba, there were women and children along the road, all walking toward the community center.  It was a true Guatemalan “red carpet” rolled out for us, as if we were the most important dignitaries they could ever hope to meet.  When we disembarked the bus, there were throngs of children ready to meet us and they led the way up a muddy pathway to the location of the day’s big festivities.  The women, most likely the “monitoring mothers” who help provide education to the community about the health projects MTI does, greeted us with warm hugs and kisses on the cheek.  All I could say was the one Qechi word I could remember:  Bantiox, and I meant my “thank you” in the deepest way possible. 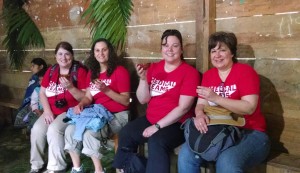 Groups of men were playing traditional music on handmade instruments, including the marimba.  They had scattered fresh pine needles all over the dirt ground as a carpet for us.  A little girl all dressed in traditional Mayan attire was carrying a great-smelling incense in a pot.  The whole experience–in just a moment’s time–was humbling.  Several of us choked back the tears.  About half of our team was led into the community center building where the ceremony would take place, and were seated on a bench near the front.  The little girl all dressed in traditional attire (I later learned she was the “princess” for the year and would tend to these special events) took her position, knealing on her knees on a mat.  She kept herself poised for more than an hour while she doled out a chocolate type of drink to us during the ceremony.  Another little girl would take the cups she filled and bring them to us.  When we were finished (although not all of us finished them…not knowing whether the water had been boiled), those cups were refilled and passed to other team members, then to the community leaders, then to the residents themselves.  I’d say each cup was used by about 12 people without washing in between, so I was glad that Dominique, Kendra, Stacy and I were the first inside!

Eventually, all the others came inside and the community members crammed into the building and more stood outside with their faces smashed together through the open window.  About half a dozen community leaders — mayor, pastor, school principal and others — each had their turn at the microphone to deliver speeches about their gratefulness for our being there.  They prayed, read scripture, offered multiple blessings and talked about how excited they are to see every home end up with a stove that will help improve their health.

All the while, the children were either perfectly quiet on the floor, or visiting which each of us in a quiet manner.  No mother ever needed to reprimand her child, no adult ever “shh”ed them.  Several little girls had picked bouquets of hydrangeas and were decorating us with flowers.  Even the men got flowers stuck through their wedding bands, as the women got flowers tucked behind their ears or in the necks of their shirts.

Daisy, a darling little one who remembered some of the team  members from last year’s trip, crawled up on Mark’s lap and the community cheered that “Kush” as they called him, had returned.  Two little girls – Brenda and Blanca – sat next to me stroking my arm or taking turns holding my hand.  Staci was given someone’s baby to hold.  (She later said she thought this must be what it’s like to play Santa!)  Phil and Jean were surrounded by little kids who lavished them with love and attention: Jean appeared to be totally in her element and filling a role of every kid’s favorite gramma; Phil’s eyes continually glistened with tears.  Kendra’s heart jumped when she bonded with a little girl who happened to be wearing the same pajamas her own little girl has.

We didn’t understand all the speeches, but Jorge, (dubbed our Super Mayan!) interpreted them all, until he tired of doing word-for-word translation of these long messages and finally started ending with just “Amen!”  What I remember of his sharing was the emphasis the leaders had on recognizing that all we have comes from God and that God makes all things possible, including the visit of this team of Americans.  They prayed for us to be blessed and to know that we are all serving the same God.

Following all the speeches, we went outside where the little princess girl took the floor for a solo dance, demonstrating what we have dubbed “the old woman shuffle” for its slow movement and tiny steps.  Then the elderly women joined her and began pulling our team’s women out with them.  We were glad the “dance” wasn’t difficult!  When the men on our team came out, they were quickly showed by the community men that they must keep their hands behind their backs while dancing!  (Ha — maybe we should encourage this in the USA!)

It was a ton of fun and amazing and touching and overwhelming all at once.  By the time this was over and sat to have lunch, we were tired.  So much stimulation, physically, emotionally and spiritually, to take in.

At long last, we split into teams and began the work we’ve talked about for months, going to homes and installing the stoves that would burn less wood, keep the smoke contained and provide a better cooking surface than their existing open fires inside the home.  We all headed the same direction, walking up the gravel road, and then split to go to different homes, some of which were close to the road and others which required more hiking.

On my team were Will, Phil and Staci, led by Gladys, the other “Super Mayan” working with our team on behalf of MTI.  She is amazing to watch … the way she communicates in both Spanisih and Qechi (sometimes at the same time) and knows all the details of building the stoves, using the minimal tools available to level the ground, lay the concrete block foundation, pack the firebox and cut the hole in the roof for the ventilation pipe.  Really, we weren’t any help on this project, other than fetching the pieces needed in the next step.  At several times in the process, the tiny room was filled with more than a dozen people: Marcielle, her daughters, several neighbors and their children.  Some of them would stand on little step stools to peer over the wall that separated this room from the former kitchen.  The minute the last piece was going on the stove, Marcielle had her kindling and matches, ready to learn how to make this thing work.  Gladys explained the placement of the kindling, how to clean the stove top, how it could be used for boiling pots or cooking tortillas, and the safety feature of the wire around the pipe to prevent accidental burns.  They were so intrigued and excited.  We shouted and clapped when it was all finished, and took pictures.

Gladys asked if one of us would pray, and I offered, but Marcielle had things to say first.  A stoic looking woman with deep worry lines and signs of hard living, she was amazingly moved (and moving).  Gladys translated for her:

“I want so badly to tell you in your own language how much I thank you, but I do not know your language.  I will speak through Gladys instead, to tell you how wonderful it is that you have sacrificed to come here for us.  That you left your country, your home, your own families, to come and help us.  We need each other.  And I thank God for you and ask his blessings on you.”

Needless to say, we were in tears.  I hadn’t thought that my trip was any kind of sacrifice … but SHE saw it that way, and everything she said and probably felt was based on that notion of great sacrifice.

Marcielle’s neighbor was ready to move us to her home next, but because the first installation had taken longer than expected (poor Gladys working with amateaurs!), we had to postpone the second stove for the next day.  Olga was there, nursing her baby, tired from having helped organize the day’s activities, when I snapped a photo of her that captures just how hard their lives have been.

We ventured back to the bus and waited for the other teams to return, then enjoyed our bumpy, beautiful ride back to Coban.  Dinner was at a lovely restaurant that served us by candlelight, and as usual, Mark led us in discussion of the day’s events.  Some people said the most unforgettable moment was the welcoming party, others said it was the reaction of the families getting the stoves, Jean said it was seeing a young girl yell, “I love Gringos!”  But we all agreed it was a day that changed us.  Changed our understanding of serving versus helping, of communicating without words, of knowing that for all our differences, we are really much the same: we all want our children healthy, we all want a sense of community, we all know that none of us can accomplish anything on our own: in a nutshell, we need each other.

I’m reminded of some words that our Super Mayan friends Gladys and Jorge have tried to teach us.  Unfortunately, I can’t recall the words themselves, but I’ll never forget their meanings.

The Qechi greeting literally means, “How is your soul?”  And the response means, “It is well.”

Indeed, it is well with my soul.

6 thoughts on “Royal guests in a Mayan village”